A suprasegmental or prosodic feature is a speech feature that affects a segment longer than the phoneme, such as accent, intonation, rhythm, duration, and others. The term suprasegmental implies the existence of elements that fall on more than one segment at the same time. Suprasegmental features definition

The suprasegmental features to those characteristics of each statement that overlap linear elements that affect segments larger than the phoneme.

Accent , pauses and intonation . There are more suprasegmental features, but not all are relevant in all languages. For example, the amount or duration of the syllable (long or short) It is relevant in languages ​​such as Arabic, but it is not in Spanish.

The prosodic or intensity accent is a special force with which we pronounce a phoneme Vowel of each word. Although it always falls on a vowel, which is the syllabic nucleus, it affects the whole syllable, making it stand out among the other syllables of each word. This it allows to distinguish between tonic (accentuated) and unstressed (unstressed) syllables.

According to the position of the tonic syllable, we distinguish between sharp , flat words , esdrújulas or over drugs (you have already studied this many times). As we have already indicated, the Castilian accent does not have a fixed position, so it has value significant, since changing the position of the accent allows us to change the meaning of the word, as it happens between “song” (noun or present verb) and “sang” (verb in past).

When we pronounce them in isolation, all words have an accent. However, when integrated into the sound chain of a sentence, some words lose their accent, which is “Absorbed” by that of other more important words. They always keep their accent the nouns, adjectives (except apocopates), verbs, most adverbs and most relevant pronouns. It is almost always lost by the monosyllable determinants, the prepositions, most conjunctions and unstressed pronouns. The rest of the words It depends on each specific case. Although the accent may seem a secondary aspect of a language, the truth is that the Castilian accent, and its peculiar use, is one of the most relevant and characteristic features of our language. In fact, at some point in the early Middle Ages, the amount

Latina began to lose importance and her place was taken by the accent. This was one of the  The quantity is the duration of the syllable (long or short), which in Latin had a relevant value and was the basis of the poetic rhythm.

The pauses are the more or less long silences that interrupt the speech and separate some segments (phrases, phrases …) of others. These pauses serve a double function: for a On the other hand, it allows us to rest and coordinate breathing with speech; on the other, they contribute or alter part of the meaning of the message, as we will see in the graphic examples that appear at the end from the next section. In the written language, these pauses are represented, imperfectly, for different punctuation marks. According to its causes and its intention, we can distinguish the following types of pauses:

For physiological causes , they are caused by the need to breathe and recover the air that we need again for phonation to occur. For linguistic reasons , they signal the end of an expression. These can be from various kinds:

Absolute final pause, when it occurs after a statement. In the writing, is indicated by the point.

Enumeration pause, if it occurs among the members of an enumeration. By example: Children are restless / naughty / unstoppable // . Suprasegmental features definition

-Explanatory pause. It is the pause that occurs at the beginning and at the end of a explanatory statement included in a broader statement, as in: Your brother / who is very handsome / will come tomorrow // . In writing, these clauses explanatory usually appear in commas or in parentheses.

Potential pause , performed by the speaker’s will. It can be caused by a change in the normal order of the sentence, as in When you come / don’t forget let me know // (you can also say: When you come, don’t forget to let me know //. ), or for the desire to highlight a word isolating it from others, as in I want / also / make this very clear // , or it was / you / who said it // (in both cases, the Bold word is highlighted and becomes more relevant by isolating it from that surround her.

Suspensive pause : when the speaker voluntarily interrupts the statement before reaching the end, with the purpose or to create some tension in the listener ( You can not imagine who I was there … your brother ) or cause a understood with him ( And I don’t tell you more, than a good listener … ). In this last case, we can do without finishing the sentence, since we are sure that The listener already knows. As you can see from the examples, this type of pause is represented by ellipsis.

The intonation is the main feature of the sentence. This depends on the variations in the frequency of vibration of the vocal cords. It covers the entire phrase and can contribute in the change of meaning and in the expression of certain states psychic or feelings, such as satisfaction, rejection, anger, etc. We can define it as the line melodic of a phrase, result of the succession of the successive tones of the same voice during the issuance of that phrase. Within the melodic behavior of the phrase or the phonic group we must distinguish between tonal variations existing within the phrase, which may be related to regional, individual or occasional peculiarities; and the tonal variations that appear at end of the phonic group, which are significant. Some authors consider it more important to learn the intonation of the phrase well than the specific pronunciation of each sound, since the lack of articulation of the sounds if you have a good intonation, as well as a bad intonation can distort the pronunciation almost completely. The intonation can be of different kinds, depending on the prayer we are enunciating Thus, we can distinguish between intonation in the enunciative phrase, in the interrogative and exclamatory. In writing, the enunciative intonation is not indicated by no way. Interrogative and exclamatory intonations are indicated by the corresponding exclamation and question marks. But these spelling conventions, and this classification into three types, are a very pale reflection of reality. The enunciative intonation of a documentary is not the same scientist that the enunciative intonation of a gossip that the neighbor tells me. N i is the same the exclamatory intonation caused by the anger that caused by the joy. It is not the same interrogative intonation when we expect a concrete answer that when not We have no idea what they will answer. The graphic representation of the intonation of a statement is called tonema . Suprasegmental features definition 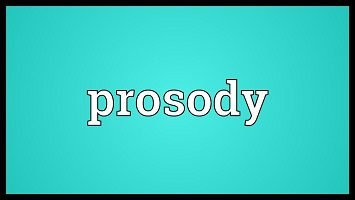