5 components of language are phonology, semantics, syntax or grammar, and pragmatics. Thanks to these four aspects, the mechanisms that make language useful and the best method for human communication can be studied and better understood. 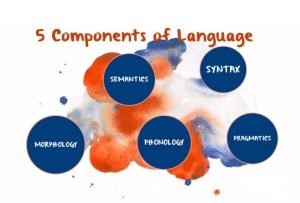 Language in humans is defined as the ability of people to communicate using a series of signals and to capture them through the body’s senses.

These signals range from gestures and mimicry to oral ones. In the same way, writing is considered language, composed of graphic signs. All of them have as main objective to be able to interact and express ideas.

Over the centuries, there have been various theories about language, as well as different approaches to studying it. Today, there are several features that all experts agree on.

Among them, you can cite the ability of human beings to acquire language from a very early age, even without anyone to teach them directly. According to Noam Chomsky, children learn a new word every hour they wake up.

Another aspect on which all scholars agree is the great importance of the spoken language. One that is learned naturally in childhood is called a mother tongue.

In the same community, each member will have the same language skills, although further education and environment will differ in the way they express themselves.

The latter theories have developed a number of language components, ranging from the phonological to the pragmatic component, each with the characteristics explained below.

The simplest particle that studies phonology is the phoneme, which can be a single sound. In Spanish, for example, there are 22 different phonemes.

Semantics goes a step further and deals with the meaning acquired by different combinations of sounds, that is, words. These are the fundamental units of language.

As with phonology, semantics also begins to develop very soon. At one year old, the child knows that words are used to communicate and, little by little, up to 6 years old, he acquires the ability to repeat them.

In order for these words to mean something, the human mind associates them with mental representations of their meaning.

This language component is essential for effective communication, as it includes two very important parts.

On the one hand, syntax is defined as the set of rules for forming sentences. It will help to correctly place the words to form sentences that make sense and express what we want to communicate.

On the other hand, morphology is closely related to the previous one, which is why their union is known as grammar. The morpheme is the simplest unit of the word, which cannot be further divided.

With morphology, you can create new words using that root and adding components.

The last of the components of language is the one that adapts one’s language to the society in which one lives in order to make it understandable. It is usually divided into three different skills: