In specific terms,  Linguistics is the science that studies the natural phenomena that occur with verbal language .and also orally. In this way, it fulfills an important role since it spreads knowledge and discoveries of language that allow man to better understand the changes arising from his process of evolution within the history of humanity. In recent years, linguists – people who are dedicated to the research and study of language – have expanded numerous works and discoveries in this area in order to more clearly explain these linguistic phenomena. As an example of these phenomena, the mutations suffered by both verbal and oral language are cited – two essential axes of research and discoveries. Scholars understand, therefore, that all changes that occur with written language transfer aspects to the act of individual creation of speech. Branches of linguistics 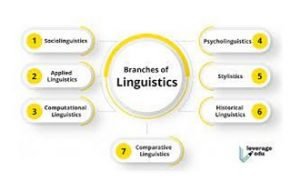 Language – A set of sentences, each made up of a series of words. Therefore, it is an activity, an uninterrupted creative process of construction, which materializes in the form of individual speech acts.

Language – It is the use of all this activity, of this set of phrases and series of words that in a certain place, historical and social context are used by human beings for communication to take place. Therefore, linguistics explores this universe of communication and its transformations to identify the phenomena that occur over time.

Linguistics has a diversity of branches covering specific language studies. Some branches study communication or written language and others oral. Below are the main branches of linguistics.

Traditionally, it has focused on the study of phoneme systems in certain languages, but it can also encompass any linguistic analysis, whether below the word (syllable or otherwise) or at all levels of the language where sound is considered structured. to convey linguistic meaning. Branches of linguistics

Morphology is the study of words, how they are formed and their relationship to other words in the same language. Similarly, morphology looks at the structure of words and parts of words such as stems, roots, prefixes and suffixes.

Morphology also examines parts of speech, intonation and stress, and the ways in which context can change the pronunciation and meaning of a word.

Syntax is the set of rules, principles, and processes that govern the structure of sentences in a given language, specifically word order and punctuation.

The term syntax is also used to refer to the study of such principles and processes. The aim of this branch of linguistics is to discover the syntactic rules common to all languages.

Phonetics is the branch of linguistics that covers the dissertation on resonances and phonic perceptions of human language or, in the case of sign languages, the equivalent aspects of signs.

It refers to the physical properties of sounds or speech signals: their physiological production, their acoustic properties, their auditory perception and their neurophysiological state.

Semantics is the linguistic and philosophical study of meaning, in language, programming languages, formal logic and semiotics.

It deals with the relationship between signifiers, such as: words, phrases, signs and symbols. Study what they represent, their denotation.

In international scientific vocabulary, semantics is also called semasiology. The word semantics was first used by Michel Bréal, a French philologist. It denotes a range of ideas, from the popular to the highly technical.

In linguistics, it is the study of the interpretation of signs or symbols used in agents or communities within particular circumstances and contexts. Branches of linguistics

Within this view, sounds, facial expressions, body language, and proselymica have semantic (meaningful) content, and each comprises several branches of study.

It is the branch of linguistics that rehearses the ways in which context provides meaning in communication.

Pragmatics includes speech theory, conversation during interaction, and other perspectives on language behavior in various humanities.

Pragmatics is the study of how context affects meaning, for example, how sentences are interpreted in certain situations (or the interpretation of linguistic meaning in context).

In the following sentence: “The children have already eaten and, surprisingly, they are hungry”, the linguistic context helps to interpret the second sentence, depending on what the first sentence says.

Situational context helps to interpret the second sentence, because it is common knowledge that humans are not usually hungry after eating.

Lexicography is divided into two separate but equally important groups:

Lexicology is the part of linguistics that studies words. This may include their nature and function as symbols, their meaning, their relationship to epistemology meaning in general, and rules of composition starting with minor elements.

Lexicology also involves the relationships between words, which may involve semantics (e.g. love vs affection), lead (e.g. probeable vs impenetrable), usage and socio-linguistic distinctions (e.g. meat vs pulp), and any other subject involved in the analysis of the entire lexicon of a language.

The term first appeared in the 1970s, although there were essentially lexicologists before the term was coined.

Computational lexicology is a related field that deals with the computational study of dictionaries and their contents.

In applied linguistics, the focus of study is to solve the problems that arise in relation to the teaching of different languages ​​and the translation of texts. In addition, it also proposes to solve some language-related disorders.

Obs : In addition to this categorization, linguistics can have a synchronic or diachronic focus of analysis.

Also called descriptive linguistics, in this methodological bias, several speeches are observed at the same time, that is, in a certain phase. It is closely related to theoretical linguistics which offers theoretical models about the area.

Also called historical linguistics, in this focus of analysis, linguistic manifestations are observed over time. Thus, it studies the changes that occur through time.

Textual linguistics contemplates the analysis of texts with a focus on the communicative process established between the writer and the reader of the text.

One of the main concepts of this strand is textual cohesion . It is analyzed by several factors of textuality which deserve to be highlighted: intertextuality, situationality and informativeness.

Linguistic discipline responsible for studying the aspects resulting from the language/society relationship, focusing on the social variability of language. Thus, sociolinguistics has as main objective to study the influence of society on language.
We can cite as an example the change in Portuguese spoken in Lisbon after the great immigration of African origin. It is also possible to observe that the language changes from generation to generation and that words like ” boring “, ” boring ” and ” chatar “, which in the 60’s were considered vulgar, currently circulate in a current level of language.
Sociolinguistics also seeks to explain the formation of prestige variants , such as the designations of ” standard Portuguese ” or ” correct Portuguese “.

Branch of linguistics that studies the relationship between culture and language and focuses on analyzing the language of indigenous communities and how it is related to the peculiarities of primitive life, their beliefs and folklores.
The first ethnolinguistic studies date back to the 19th century, when North Americans began to study some tribal groups in the region and their respective languages, with the aim of identifying their organization and classifying them linguistically and ethnically.
Ethnolinguistics is not an isolated and autonomous discipline, as it encompasses domains of both linguistics and anthropology. It is concerned with analyzing the relationships between language and worldview, as well as the geographical context of the linguistic fact.

Study of the connections between language and the mind. It analyzes any process that concerns human communication through the use of language and the psychological structures that allow us to understand expressions, words, sentences and texts in general.
Psycholinguistics is related to other disciplines such as language science, neurology, neurobiology, psychology and cognitive sciences. It is composed of the following domains: speech acquisition and language comprehension, speech perception, oral and written production, reading, language and language disorders and thinking.

Science that studies the central elaboration of language and deals with the mechanisms of the human brain that support the understanding, production and abstract knowledge of language. It deals with the elaboration of normal language and the clinical disorders that generate its alterations.
This field walks on the border of linguistics, neurobiology and computer engineering. The term neurolinguistics has been associated with aphasiology , the study of linguistic deficits and over-abilities resulting from specific forms of brain damage.

Difference between analysis and synthesis in detail