The idiomatic term refers to everything that is characteristic of a particular language. Idioms, phrases, idioms .

What is an idiomatic expression?

An idiomatic expression is a type of phrase , that is, a combination of words whose meaning cannot be deduced by putting together the meaning of the words that compose it .

For example, the idiom ” goose pulp ” refers to a large sum of money. Even if we know that, in colloquial records , “pasta” means “money” and “goose” means “that you like to do nonsense,” joining the two meanings does not result in “much money.”

For example, if in Argentina we say: yesterday I screwed up telling my cousin that we would celebrate her birthday, because it was a surprise party , most likely we all understand what is meant, that a mistake was made, a mistake, because I screwed up is a common idiom in Argentina, however, it may happen that in some other Spanish-speaking place such a phrase does not end up being understood and therefore if a foreigner hears it, he will not understand what is being said.

Then, an idiomatic expression will always mean in block, never isolated and will admit both a literal and figurative interpretation, although the one that stands out is the figurative one.

Other examples of idioms: Laura is about to stretch her leg (she is about to die); I can’t stand you teasing me, please talk to me seriously (tease); I got a cat for a hare and I didn’t even notice (cheat).

It should be noted that those who are learning a foreign language will first learn the formal aspects of it and then they must also learn this other part of the vocabulary, more informal, but also part of the language they are learning and that will allow them to cope with naturalness and without problems when it comes to everyday communication .

Because languages ​​are inevitably shaped by that formal part of the language but also by the informal one that is normally used in the social sphere.

So when, for example, a student travels to another country to study the language spoken there, he will go to the university to learn it in a conforming manner, but he will also learn the B side of it, from the partners, at those times when those who interact outside of school , or when they are not under the formal framework of language teaching, because of course, many of those colloquial expressions that are common and hyper popular are not well regarded by language teachers.

The language or language is the basic and most important tool that human beings have to communicate through oral and written means. Through it we can manifest and understand each other, with the interlocutor who speaks just our same language.
Otherwise, it will be difficult to understand each other, and we must do so by signing or learning the language of the other, an issue that of course is not so quick or instantaneous.
A language is not learned from one day to another but it takes time since there are grammar rules, verbal ways to learn and they are not such simple questions.

Of course there are people who have a natural tendency that makes them quickly learn other languages ​​but it does not happen with all people.

The language is made up of a series of letters and symbols that are learned and adopted in a conventional manner by all individuals belonging to a culture.

The most spoken languages ​​as a result of the number of speakers they have are Chinese, which is the most spoken in the world, if we take into account that China is the nation with the largest population in the world, it is followed by English, considered as the language universal because it is spoken as a second language in almost the entire planet, in third place is Spanish, increasingly stronger , and followed by Italian, French, German …

The terms of idioms and jargon are not the same. Random House Dictionary characterizes jargon as a special vocabulary of a group or class of people, which often contains a social taboo or vulgar words and expressions. Jargon can be used abusively to attack others with arguments, criticisms or ridicule. Idioms could be seen as picturesque and concise phrases to summarize a situation.

Idiomatic expressions in all languages

Regions within a country may also vary in the use of idiomatic expressions. For example, colorful languages ​​endow the conversation of those who live in the southeastern United States, such as “He’s sorry as a two dollar watch” and “That’s finer than frog hair (That’s thinner than a frog’s hair). ” In the Midwest, someone who has a lack of common sense can be described as “a brick short of a full load” or “her elevator doesn’t go to the top floor” reaches the upper floor) “; a more modern example is “she lacks the cheeseburger in a happy meal (she needs the cheeseburger from a happy little box)”.

Understanding the subtleties of another culture can be frustrating due to natural-sounding expressions in native speakers of a language. Catherine Rogers Jonsson, an American registered as an art therapist living in Sweden states that “The subtle nuances of Swedish expressions that indicate disgust, anger, indecision, avoidance or apprehension are completely out of my reach. All this makes it extremely difficult. for a therapist to be able to conduct a session abroad. ” 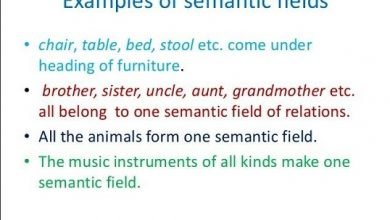