The main morphological processes are the following: 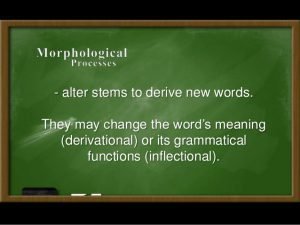 1. Affixation: From a base or root new words are formed by adding different morphemes. Depending on the position occupied by the added morpheme we have:

a) Prefixes: those morphemes that are placed before the base or root.

b) Suffixes: those morphemes that are located behind the base or root.

c) Interfixes: those morphemes that are located between the base or root and the suffix in order to unite them.

d) Circumfixes: those morphemes that are placed simultaneously in front of and behind the base or root.

2. Clitization : it is produced by the adherence of critics to a word. The critics can never appear alone since they are a kind of pseudo word.
If we look at them from a phonic perspective, they will always be unstressed, and if we do it from a grammatical point of view, we will say that together with the word to which they adhere they become a single unit.

Depending on the place where the patient is placed, we can talk about:

– Proclitics: when they precede the word they accompany.

Examples: He gave it to me, I love you, he left.

– Enclitics: when they are postponed to the word in question.

Examples: Give it to me, love me, leave.

The difference between affixes and clitics is that the latter are part of a lexical category, be they pronouns, names, prepositions, etc.

3. Internal change: this procedure consists in replacing a part of the non-morphemic word with another segment that marks a grammatical contrast. We find examples in the English language such as: foot – feet or drive – drove.

4. Supplement: occurs when there is a morphological alternation where allomorphs do not have a formal relationship with each other.

6. Accent or tonal change: in these cases the change occurs in the word by varying the accent or tone. For example, in Spanish we can see the accentual change in verbal forms such as “I dance” and “I dance”; while he changes tonal, we observe him for example in the language spoken in Zaire with words like “da” with a high tone, which means “hit”, and “gives” with a low tone, which means “will hit”.

Cognates and their comprehension 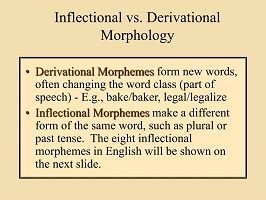