Grammar is the part of linguistics that studies the series of rules that determine and organize the succession and operation of words within sentences or texts . It somehow seeks to establish the conditions for ‘proper use of the language’ and should not be confused with spelling , which focuses on correct writing. Although grammar is sometimes understood as the study of rules and principles of syntax, it does not encompass only that. Grammar types 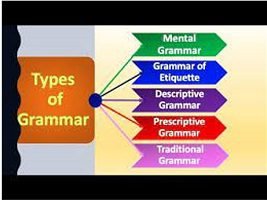 The two most well-known basic categories are:

– Sentence grammar:  it is the one known to all for being the one taught in school, it analyzes the structures in their morphological and syntactic aspects within the limits of the sentence.

-Textual grammar:  is one that extends the analysis considering the text as a whole and keeping in mind the sender and the receiver. In addition to considering the aspects already mentioned, it covers semantic and pragmatic issues.

From the point of view of specialists in the study of language and its evolution, various approaches and currents of thought are recognized for its analysis. Some of them are listed below:

– Normative (or prescriptive) grammar:  deals with the adequacy of the texts to the existing norms in the language, and the elaboration of such norms. There are normative institutions par excellence in the different languages. Grammar types

-Functional grammar:  delves into the way words are used and how sentences and texts adapt to different situations (communicational, social, etc.).

-Comparative Grammar:  deals with the analysis of the similarities and differences between different languages , also investigates how one language influences another.

-Historical grammar:  focuses on language as a living element subject to change. In this regard, it is sometimes distinguished into:

-Synchronous : analyzes a particular language at a particular historical moment . A report on the language or some of its aspects in the Amerindian languages ​​at the time of the Spanish conquest would be an example of this.

-Diachronic : in contrast to the previous one, this grammar seeks to understand the evolution of languages ​​as a historical process, and therefore, how their changes develop. The language of the Viceroyalty of the Río de La Plata throughout its historical extension could be studied by this type of grammar.

-Structuralist grammar:  current developed from the work of Ferdinand de Saussure , which is based on the concept that language is a system of signs and emphasizes the idea of ​​investigating it not only for its written manifestations, but also oral . Structural grammar conceives each language as a system that has several levels, each with its own elements, which are interrelated.

-Generativist or generative transformational grammar: it  was proposed by Noam Chomsky and understands language as part of the genetic heritage of human beings . For this reason, for Chomsky, grammar should explicitly express the rules that speakers and listeners use unknowingly.

Predicative verb with examples in Sentences

Modal verbs of probability in English with examples