Linguistics: what is it and its characteristics 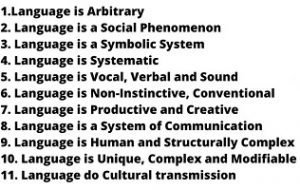 Linguistics is the science that is concerned with studying the characteristics of human language .

The linguist is responsible for analyzing and investigating the entire evolution and development of different languages, as well as the structure of words, idioms and phonetic aspects of each language.

The “father” of modern linguistics was the Swiss Ferdinand de Saussure, who contributed immensely to this science thanks to his study of language and speech.

According to Saussure’s studies, human language is composed of several factors, language being something that was imposed on the individual, as it belongs to the collective. Speech, on the other hand, is something individual, a particular act of each person.

For linguistics, all words that have a meaning are considered linguistic signs .

Linguistic signs are formed by the union of two concepts developed by Saussure: meaning and signifier .

The meaning is the very concept of the sign, that is, the idea one has of a certain word. Example: “house”, as a dwelling or “dog”, as a mammal that barks.

The signifier is the graphic and phonetic form of the sign that forms the word that is assigned to a certain meaning. characteristics of linguistics

The science of linguistics is still divided into different areas of study, such as:

Linguistic variation is a common phenomenon that occurs within the same language, when historical, regional and cultural factors alter the characteristics of the language of its speakers.

In Brazil, for example, even though the official language is Portuguese, each region of the country has its linguistic particularities, due to the influence suffered by regional historical contexts.

In addition to regionalism, linguistic variations can develop according to cultural and social conditions, giving rise to jargon and slang, for example. characteristics of linguistics

Applied linguistics is the use of this science directly to improve human communication.

The language teaching method is an example of applied linguistics, as all knowledge about the linguistic definitions of a given language is oriented towards the learning of other people.

Cognitive linguistics is one of the theoretical approaches that encompass the studies of Linguistics, which was born as an opposition to formal theories within the area, such as the so-called generative linguistics.

The differential of cognitive linguistics lies in the way it analyzes the approach to language, through human experiences and relationships, and not as an “autonomous entity”.

Cognitive linguistics says that language is an integral part of cultural, psychological, functional and communicative factors of human beings with the world.

Also known as diachronic linguistics, historical linguistics is concerned with studying the origin of languages, verifying their development, their influences, the changes they have undergone over the years and the reasons for these changes. characteristics of linguistics

This is the branch of applied linguistics aimed at studying language within the forensic context.

It is related to the interaction between language and the legal, judicial and ethical system.

The forensic linguist can act in the activities of expertise and investigation of linguistic evidence in a crime, for example.

The ten characteristics of a language are given under. Please learn fastidiously for correct understanding.

Language is undoubtedly arbitrary as there isn’t a inherent connection between the character of issues or ideas the speech offers with. Nonetheless, these issues and concepts are expressed, and there’s no cause why totally different communities pronounce a ‘single time period’ in a different way.

A phrase was chosen to imply a particular factor or concept is unfair. It is perhaps seen that if a language had not been arbitrary, there would have been only a single language that remained all through the world. That’s the reason we are able to take into account language as an arbitrary vocal image.

2. Language Is A Social Phenomenon

In a way, language needs to be thought-about a social phenomenon. Language is social in our human society; it’s a means of nourishing and creating tradition and establishing human relations. characteristics of linguistics

As a member of a selected social group, we human beings work together with one another, permitting us to determine with each other and join and coordinate with each other. That is how language is a component and parcel of our society.

Language exists within the public area, is a technique for feeding and making a society, and units up human relations. As a member of the neighborhood, we purchase a language completely.

3. Language Is A Symbolic System

Language signifies a symbolic system, and it consists of totally different sound symbols for ideas, issues, concepts, objects, and so on. Language has sounds and phrases as their symbols.

These symbols are picked and routinely acknowledged and utilized. The phrases in a language are usually not simply patterns or photos however symbols that denote which means.

The language makes use of phrases as symbols and never as indicators for the idea represented by them. The core worth of a language typically depends on the right rationalization of these symbols.

Moreover, all languages have phonological and syntactic programs, and inside a system, there are additionally a number of sub-systems.

As an example, we have now the morphological and syntactic programs contained in the linguistic system. Inside these two sub-systems, we have now programs, resembling plural, of mindset, or perspective, of tense, and so on.

5. Language Is Vocal, Verbal And Sound

Language is a system of vocal and verbal symbolism, and it’s primarily comprised of vocal sounds simply created by a physiological articulatory element within the human physique.

Before everything, it exhibits up as vocal sounds solely. Language takes verbal parts resembling sounds, phrases, and phrases fastened up in particular methods to make a number of sentences.

Language is vocal and sound, which is produced by totally different speech organs. Writing might be thought-about as an clever platform to signify vocal sounds, and it’s the graphic illustration of the speech sounds of the language.

No language was made in multi-day out of a generally settled upon recipe by a gathering of folks. Language is the end result of development and custom, and all ages transmits this custom onto the next.

Like each human group, languages may additionally change and move on, develop and lengthen. Every language has a circulation in a selected neighborhood across the globe. Nonetheless, we are able to take into account language as non-instinctive as a result of, naturally, it’s acquired by us.

7. Language Is Productive And Inventive

Language has its effectivity and innovativeness. The auxiliary elements of human language are joined to create new expressions that neither the speaker nor their listeners could have made or heard beforehand.

Truthfully, the 2 sides comprehend with out bother. Language might be modified as indicated by the requirements of human society. In spite of everything, language has the facility of productiveness and creativity.

8. Language Is A System Of Communication

Language is robust, handy, and the perfect kind of communication for little doubt, and it’s the easiest way to precise every little thing. By means of language, we human beings specific our ideas, wishes, feelings, and emotions.

Additional, we are able to work together simply by way of the welfare of language. In spite of everything, we could say that language is the perfect communication system around the globe.

9. Language Is Human And Structurally Advanced

Human language is open-minded, extendable, and modifiable, opposite to animal language. Language needs to be modifiable on occasion.

No species aside from human beings have been endowed with language. So we are able to say that language is of course human, structurally complicated, and modifiable in some instances.

10. Language Is Distinctive, Advanced, And Modifiable

Language is certainly a singular phenomenon on this planet. Each language has its characteristics and distinctive options. Moreover, every language has its creativity and productiveness to ship the perfect methods to speak.

And that is how language has the potentiality to be distinctive, complicated, and modifiable by the change of time and tradition.

Difference between definition and statement in detail