With this definition in mind, it will be much easier to address the definition of functional grammar, which can be described as one of the types of grammar, which seeks an analysis of the language from its conception of a social instrument , seeking to understand the use of different expressions that exist within it, from the need or social interest of the speakers who use them, hence it receives the name of functional, since it seeks to study the use of words and other syntactic structures within the communicative situation in the which takes place, taking into account the linguistic context of the speakers at all times.

According to what the different sources point out, this Grammar was promulgated by the Dutch linguist Simon C. Dik, at the end of the seventies, as a result of its purpose to carry out a model of linguistic analysis that would allow it to understand the functionality that the Language had within – and linked exclusively – to the communicative situation. Likewise, Functional Grammar functions as a theoretical response to linguistic currents such as generativism or structuralism, models to which mainly, Functional Grammar, criticized their eagerness to establish grammatical categories, which in studying the use and social sense that they could have for speakers of a language, unlike this grammar for which the same category could perform different functions, since the relationships of these constituents are studied according to each of the constructions in which they are integrated.

Grammar studies the use of words, phrases and sentences, but this field of study, like any other, can be approached from very different budgets and values. That is why throughout history different schools of grammatical analysis have emerged that have, in turn, brought new perspectives to the field of linguistics.

One of these models is that of the so-called functional grammar , which was born in the late seventies (twentieth century) by the hand of the Dutch Simon C. Dik. Functional grammar, which was initially based on the Valencian grammar of Lucien Tesnière, is called that because it is based on the idea that, being the language a social instrument, the work of grammar must be to discover and understand the use that It is made of it in social interactions . Thus, the work of grammar works is to study how words, phrases, sentences, and sentences work according to both the context and the different communicative situations.

Both the name and the way to approach the study directly relate to the functional grammar of Dik with the broader current of linguistic functionalism. However, within functionalism there are multiple perspectives that differ in how they define the concept -key- of function. For Dik, function is always relation, and so, for example, the linguistic problem of the voice is nothing more than a variation between the assignment of the subject function and the object function based on the speaker’s situation.

Functional grammar strongly opposed other schools of interpretation, such as structure grammar and generative grammar. The functionalists consider that these currents give excessive relevance to the questions of the categories, that is, those that require intrinsic properties. Instead, functional grammar focuses their interest on functional issues , or what is the same, on the relationships between constituents within the sentence. In this way the same grammatical category (be it a noun, verb, etc.) can perform different functions depending on the context, functions that apply to three different levels: semantic, syntactic and pragmatic.

The expression of the language happens, in the opinion of the functionalists, in an underlying predicate that form referential expressions inserted in structures. The predicate is the expression, or coding, linguistic of a given situation.

Likewise, the Functional Grammar points out that the different functions that the constructions of a Language can have also occur in what its creator, Simon C. Dik called structuring levels, and which he defined as three of them: 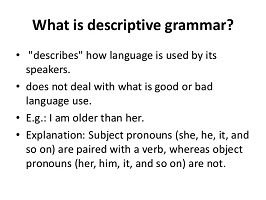 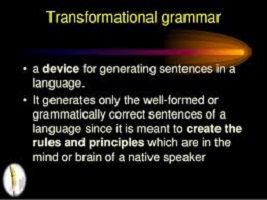 Verb phrases in English with examples and structures