The literature Persian refers to the literary tradition that emerged in the third century Islamic (IX century d. C.) simultaneously with the revival of the Persian language as a literary medium. Here we will provide you the information about the Famous Persian authors.

For more than a millennium, it continued to exist as a living and extremely productive “tradition”. And he had an unmatched command over all activities at the level of educated literature.

Its normative force was evident also in the literatures of other Muslim nations that were not speakers of the language, but were strongly influenced by this literary tradition.

Even non-Muslim civilizations – especially Jews and Zoroastrians – faithfully followed classical rules when dealing with Persian poetry with themes belonging to their own religious traditions.

Persian culture had its origin in a series of migrations destined for the Iranian plateau, between the Caspian Sea and the Persian Gulf. The peoples of Asia Minor, southern Russia, and Ukraine went there.

His literature is estimated to span a cultural period of more than 2,500 years. However, many of the documents produced in the early eras (pre-Islamic period) could not be recovered.

However, Persian literature had a high diffusion due to the vastness of the empire. As a result, works written in Persian can be found in countries like Pakistan, Afghanistan, India, and other countries in Central Asia.

Until the late Sassanid period (226-651 CE), the pre-Islamic Persian Empire was primarily a non-writing society. As a result, his literature was for a long time essentially an oral tradition.

In the early days of this empire, writing was used in royal inscriptions or for administrative and economic purposes. Therefore, for centuries it was the exclusive privilege of scribes or clergy.

The works from this period are religious poems and love stories. The language used in the composition was Aramaic and Greek.

Due mainly to the orality of the literature of this period, very few complete works of literary value could survive.

This period is framed between the 9th and mid-19th centuries. In that period of time, the advent of paper and the operation of the first printing presses favored the production of written literary works.

Another factor in the evolution of Persian literature in this period was the Arab conquest of their territories. Contrary to the usual in these cases, Persian became the court language of the first Muslim principalities.

Almost all of the writing during this time took the form of poetry, although some momentous works in narrative prose are from that time as well. Among them are Aladdin, Ali Baba and the forty thieves, or Sinbad the sailor.

Thus, Persian historians and spiritual figures transmitted written works, some from their pre-Islamic era, to the Muslim world. These included, in addition to stories, history, moral instruction, and political advice.

Despite Arab rule, the Persians became the bureaucrats and scribes of the empire. Thus gradually, were also its writers and poets. They wrote in Persian, but also in Greek and Arabic.

Many literary critics argued that Persian poetry should reflect the realities of a country in transition. Consequently, he began a process of experimentation with a new lexical-semantic rhetoric and structure.

Similarly, many aspects of Western literature are adapted to the needs of Iranian culture.

New Persian authors of this period create stories that focus on plot and action rather than mood or character.

Likewise, different approaches are experimented with, from realism and naturalism to surreal fantasy.

He is also known as “The Lord of the Word.” He is considered the most important poet in Persian literature. He is the author of the immortal epic entitled shāhnāma or Book of Kings . This is a national work of Persia (today Iran)

This was a Muslim Persian mystic and poet. He is recognized for his masterpiece Mantiq al Tayr (The Language of the Birds or The Conference of the Birds). In this work the human soul is compared to birds.

Other works in his repertoire are Diwan , the group of quartets entitled Mukhtar-Nama , Moktar or Mukhtar Nama (Book of Choice) and Tadhkirat al-Awliya or Tazkirat al-Awliyā (Memorial of the Saints).

He is considered among the great romantic epic poets of Persian literature. Their cultural heritage is highly revered in present-day Iran, Afghanistan, Tajikistan, and Azerbaijan. The realistic and colloquial style was the hallmark of his work.

From the literary production of this author, we can cite Haft Paykar (the seven beauties), the tragic romance entitled Chosroes and Shirin and Eskandar-nameh (The book of Alexander).

Forugh Farrojzad was an Iranian poet and film director. She was also an emblem of the feminist movement of her country, and belonged to the group of renovators of 20th century literature.

Farrojzad is well remembered for her works Captive , The Wall , Rebellion , In Another Dawn and We Create at the Beginning of the Freezing Season (posthumous work published in 1974), among others.

This was an Iranian translator, narrator, writer and poet, who dedicated his life to the study of Western culture and the history of his country. 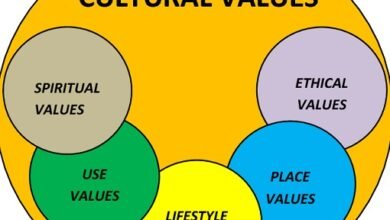 What are Cultural values concept examples and importance