It is necessary to know the structure of the human speech apparatus, i.e. know the organs of speech. The exhaled stream of air from the lungs passes through the bronchi and enters the windpipe. We are describing here the definition of  Organs of speech.

The organs of speech are usually divided into active and passive. The active organs of speech include the vocal cords, the posterior wall of the pharynx, the soft palate with a small tongue, lips, and tongue. They are mobile and in the process of forming sounds occupy one or another position in relation to the passive organs of speech: teeth, alveoli, hard palate, which are motionless.

Active and passive organs of speech

With the participation of articulation, the organs of speech are divided into active and passive.

The active organs of speech perform the main work in the formation of sounds. These include:

In the broad sense of creating sounds, that is, taking into account the middle and lower floors of the speech apparatus, this also includes:

Passive organs of speech perform an auxiliary function when creating sounds. These include:

The totality of articulatory skills necessary for the correct pronunciation of the sounds of a particular language is called the articulatory base of speech. The articulation base is produced as a result of prolonged training in pronouncing the sounds of a certain language, due to which the nerve fibers coming from the neurons of the brain (and there are more than 10 billion of them) densely penetrate precisely those muscles of the speech organs that are actively involved in the articulation of these sounds. Thus, for those for whom Ukrainian is their native language, the muscles of the speech organs are penetrated by nerve fibers in a different way than those who speak from childhood, for example, Georgian, Russian or English. The transfer of the articulatory base of one language to the pronunciation of sounds of another language causes the so-called accent.

Articulation bases are typical, characteristic of large groups of people, and atypical, deviating from the generally accepted pronunciation of individual sounds (lisp, burr, etc.). The speech therapist helps to correct the deficiencies of articulation (according to I. Yushchuk).

There are three phases in articulation.

The position of the organs of speech at the moment of pronouncing (from Lat. Culmen – “top”, or “endurance”).

The return of the speech organs to their original position (from the Latin. Recursio – “return, retreat”).

The exhaled stream of air from the lungs passes through the bronchi and into the windpipe. The upper part of the windpipe is called the larynx. In the larynx are located

two muscular elastic movable folds – vocal cords; the space between them is called the glottis. When pronouncing voiceless consonants, the vocal cords are not tense and spread apart. When the vocal cords are tense and close, and the flow of air makes them vibrate, a voice arises that we hear when pronouncing vowels, sonants, or voiced consonants. The cavity located above the larynx is called the pharynx, or pharynx.

The following organs of speech are located in the oral cavity: tongue, palate, which separates the oral cavity from the nasal cavity, teeth, and lips. For the convenience of describing articulation

sounds, the tongue is conventionally divided into the following parts: the front part with the tip of the tongue, the middle and back with the root of the tongue. The palate includes the alveoli, the hard palate, and the soft palate with a small uvula.

Organs of speech and their work

When the vocal cords are tense and close, and the flow of air makes them vibrate, a voice arises that we hear when pronouncing vowels, sonants, or voiced consonants. 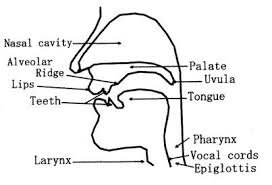 Six Manners of Articulation With description